Labor Day: A Day to Celebrate the American Trades Worker

Have you ever wondered what Labor Day is all about? Is it merely a day dedicated to resting from our labor, firing up the grill, and celebrating the unofficial end of summer? Or is there something more to it? 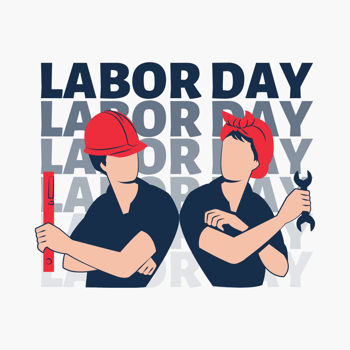 While Labor Day is a day marked for celebration, camaraderie, and rest, the observance of the holiday is a hallowed one for those in the building trades.

During the height of the industrial revolution in the late 1800s, American workers were subject to horrific and unsafe working conditions. They worked 12 hours a day, 7 days a week, only to earn a very meager wage. Over time, these hard-working men, women, and even children began to band together to demand safer working conditions, better pay, and reasonable hours. This was the start of the labor movement.

As the movement progressed, Labor Unions started to form across the country, and protests, strikes, and rallies became common occurrences. On Tuesday, September 5, 1882, led by the Central Union, over 10,000 American workers took unpaid leave to march the streets of New York City in protest. This is hailed as the first-ever Labor Day parade and quickly became a tradition not only in New York City but in cities across the country. It was a self-appointed “holiday in honor of workmen” everywhere.

While the labor movement grew stronger and stronger, there was still much progress to be made. Courageous men and women continued to make a stand for what was rightfully theirs: fair compensation for their hard work, safer working environments, reasonable hours, and, ultimately, respect. But it was a battle.

Finally, 12 years later on June 28, 1894, President Grover Cleveland signed the Labor Day holiday into law as a peace offering to American workers after several protests and strikes turned into deadly riots. Ever since then, Labor Day has been nationally celebrated on the first Monday of September to honor the contributions American workers - and more specifically trades workers - have made to the strength, prosperity, and well-being of our country. Labor Day is a day of great pride for the men and women in the trades.

This Labor Day, as you’re cracking a cold one, enjoying your local parade, or throwing a burger on the grill, take a moment to remember and honor the hard-working women and men who came before you. Without them, we wouldn’t have the country that we have today, with the great infrastructure and prosperity that we enjoy, nor the rights that we have in our work.

Interested in joining the ranks of the men and women that continue to build our great nation? Learn more about a rich and rewarding career in the trades.