What Does a Trade Job Mean?

You’ve likely heard of someone being “in the trades” or being a “tradesperson.” You may have even heard someone say: “You’d do well in the trades!” But, what is a trade job, and how is it different from other jobs or professions?

Generally speaking, a trade job is a job that is a specialized craft that requires advanced training and education, but not from a 4-year college or university. Trade workers receive their education and training through apprenticeships, on-the-job training, specialized education programs, and/or vocational schools. While many think of the construction trades when “the trades” are mentioned, the trades also include pilots, dental technicians, paralegals, home inspectors, paramedics, and so many more professions.

What is a skilled trade? How is it different from other trades? 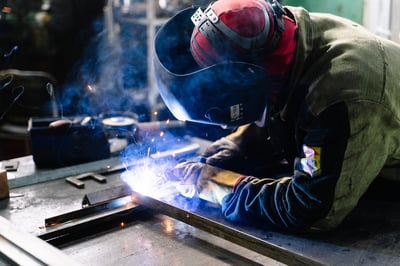 The term skilled trades has historically referred to trades that fall within the construction or manufacturing industries. Those in the skilled trades have a very honed and specialized craft, which requires a high level of training, education, and knowledge. This term doesn’t mean that the other trade occupations aren’t skilled or are less skilled - much to the contrary! The term “skilled” likely came about to draw a distinction between tradespeople and the general laborers they worked beside, who didn’t have any formal education or training. Building trades is more commonly used now within the trades, in place of skilled trades.

Is a trade job a good job?

Yes! The building trades have some of the highest job satisfaction ratings, and for good reason! It’s fulfilling and rewarding work - tangible work you do with your own hands - and comes with amazing benefits, including competitive salaries, great work-life balance, rich health and wellness benefits, and more. Also, the building trades are in extremely high demand right now, and will be well into the future. Tradespeople have skills that are near impossible to outsource or automate, meaning lots of job security. Trade life is a great life!

How do you get started in the building trades?

The best way into a construction trade is through a registered apprenticeship program. Apprenticeships provide education both in the classroom and through real, hands-on experience from on-the-job training alongside seasoned professionals in their respective trades.

To get started, you need to think about the type of work you want to do, and then explore the different crafts available. For example, do you want to work inside a building or outside? Are you artistically or mechanically inclined? Once you have that narrowed down, explore the different trades and apprenticeship programs, and be on your way toward building a fulfilling and meaningful career!