Do You Have to be Physically Strong to Work in Construction?

Construction work has the reputation of being physically demanding and hard on your body. While some jobs in the building trades can be physically intense, there are many that don’t require brute strength or really much strength at all. It’s one of the biggest myths of construction work! 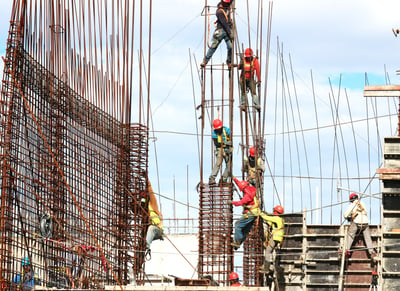 In fact, many people choose a career in the building trades because of the physical aspects. In the trades, work is active and engaging. No sitting in one place behind a desk for countless hours on end. In the trades, you’re up, moving, and working with your hands to build something meaningful and lasting. It is physical work, though, and physical work does require different abilities and skills than that of your average desk job.

What physical skills are needed to work in the construction trades?

As it is in most industries, it depends! It depends on the trade, your role, and even your specialty within that given craft. For example, many tradespeople consider inside electrical work and ornamental painting to be some of the least physically demanding trades, at least as far as brute strength goes. In some crafts, strength does matter. Ask a lineworker, and they’ll surely tell you harrowing stories about how their strength, or the strength of their fellow lineworkers, literally saved their life in disaster situations.

No matter the trade, there is one thing that is required: stamina. Due to the nature of the work, all crafts use repetitive motions and tasks, and stamina is required to keep up. Other skills that are universally critical to succeed in all trades are dexterity and hand-eye coordination. All of the trades are true crafts that require precision and coordination.

Which construction trades require the most strength?

If you’re looking for a trade job that requires less muscular strength, there are tons! Plumbers and electrical workers are considered two of the less demanding crafts when it comes to brute strength, but there are lots of others like painters, operating engineers, crane operators, or construction supervisors, just to name a few.

Keep in mind that while it’s not always easy, trade work isn’t as physically demanding as it used to be. Continual advancements in technology and equipment have helped alleviate some of the heaviest physical burdens on job sites, reducing the need for brute strength and improving worker safety and well-being.

Ready to flex those muscles - or not! - and try out a new career where you can be up and moving while constructing a bright future? Learn more about the trades and get started today!