Celebrating Black History in the Trades

Black History Month, also known as African-American History Month, began as a way of remembering important people and events in the history of the African diaspora. It’s celebrated all over the world, but here in the United States, Black History Month highlights the struggles and celebrates the contributions of African Americans from all walks of life. 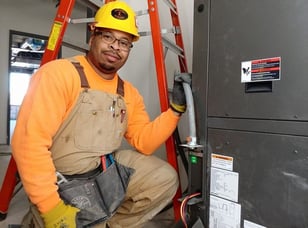 Did you know that some of the prominent African Americans in our country were key members of the labor movement? Take A. Philip Randolph, born in 1889, who was head of the Brotherhood of Sleeping Car Porters, President of the Brotherhood of Sleeping Car Porters, and Vice-President of the AFL-CIO's Executive Council. He represented the Brotherhood of Sleeping Car Porters in a dispute against the Pullman Company. He was instrumental in convincing President Roosevelt to sign an executive order, in June 1941, which called for an end to discrimination in defense plant jobs. Mr. Randolph chose the labor movement because, “"(t)he labor movement traditionally has been the only haven for the dispossessed, the despised, the neglected, the downtrodden and the poor." As Vice-President of the AFL-CIO’s Executive Council, he worked tirelessly to end discrimination from within the ranks of the union.

More recently, take Madison Burnett. Mr. Burnett is Training Director at the Electrical JATC (Joint Apprenticeship Training Committee) of Southern Nevada. After graduating from Delgado College in New Orleans, Mr. Burnett applied and was accepted into the electrical apprenticeship in 1984 and thus began his journey in the trade. Following his completion of the program in 1994, Madison worked as a journeyman wireman, a foreman, an instructor, and Assistant Training Director before taking his current position as Training Director in 2004.

Mr. Burnett’s dedication to the electrical industry has afforded him the opportunity to serve on the Nevada State Apprenticeship Council, Governor’s Workforce Development Board for the State of Nevada, International Code Council, Southern Nevada Apprenticeship Programs Association and the Advisory Committee with the electrical training Alliance.

As Black History Month comes to a close, we salute the African-American men and women who have strived, suffered, achieved and won. We’re proud that many of them call the labor movement home, and we are ever grateful for their contributions.