Breaking the Bias: Women in Construction

Did you know that women made up only 11% of the construction industry in 2021, despite making up nearly half of the entire workforce in the U.S.? 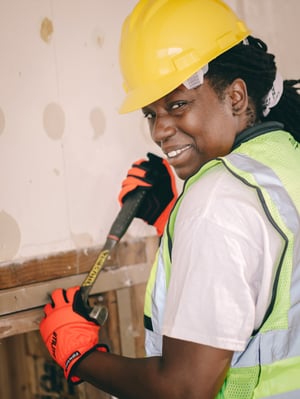 The construction industry has everything to gain by having more female workers. With an ever-increasing labor shortage in the market as boomers continue to retire, skilled workers are needed, whoever they are. Yet, it’s not just bodies that are needed. The construction trades want women.

Women bring immeasurable value to any work environment, and the trades recognize this. One of the key skills required in construction is problem solving, and science has discovered that women are uniquely wired to better combine analytical and intuitive thinking than men. What’s more, recent studies have shown that women improve company culture; having a higher percentage of women in the workplace predicted higher job satisfaction, more organizational dedication, more meaningful work, and less burnout among ALL workers. There’s no denying that women bring different skill sets and perspectives that are needed across all industries, and the construction trades are no exception.

The skilled construction trades offer numerous benefits and opportunities for men AND women alike: great pay, career stability, job satisfaction, great work-life balance, on-the-job training, hands-on work, and so much more. According to a recent survey of over 1,000 women in construction, 80% of women in construction say they love their job.

What’s even better for women: the gender pay gap is almost non-existent! On average, women in the U.S. earn only 81.1% of what men make, but in the construction industry, women, on average, earn 99% of what men make, according to the Bureau of Labor Statistics. Why? Because in union construction in particular, collective bargaining agreements dictate what people get paid by their rank and title (e.g., apprentice, journeyman), NOT gender. Journeyworkers, men and women, working at the same job site, and doing the same work, will absolutely get paid the same.

As part of their 2022 campaign, #BreaktheBias, International Women’s Day stated that: “Whether deliberate or unconscious, bias makes it difficult for women to move ahead. Knowing that bias exists isn’t enough, action is needed to level the playing field.”

The construction trades know that the industry has a long history of deeply rooted biases, and are working tirelessly to break the biases and make the construction industry a safe and welcoming place for women by:

Despite old, antiquated perceptions, the construction trades are an exceptional place for women to work and thrive. Women are strong, women are smart, and women are needed and wanted in the trades, now more than ever.

Women, are you ready to #BreaktheBias and get started with a rich and rewarding career in the construction trades? Learn how to get started today.

Topics: building trades, Women in the trades, women in trades